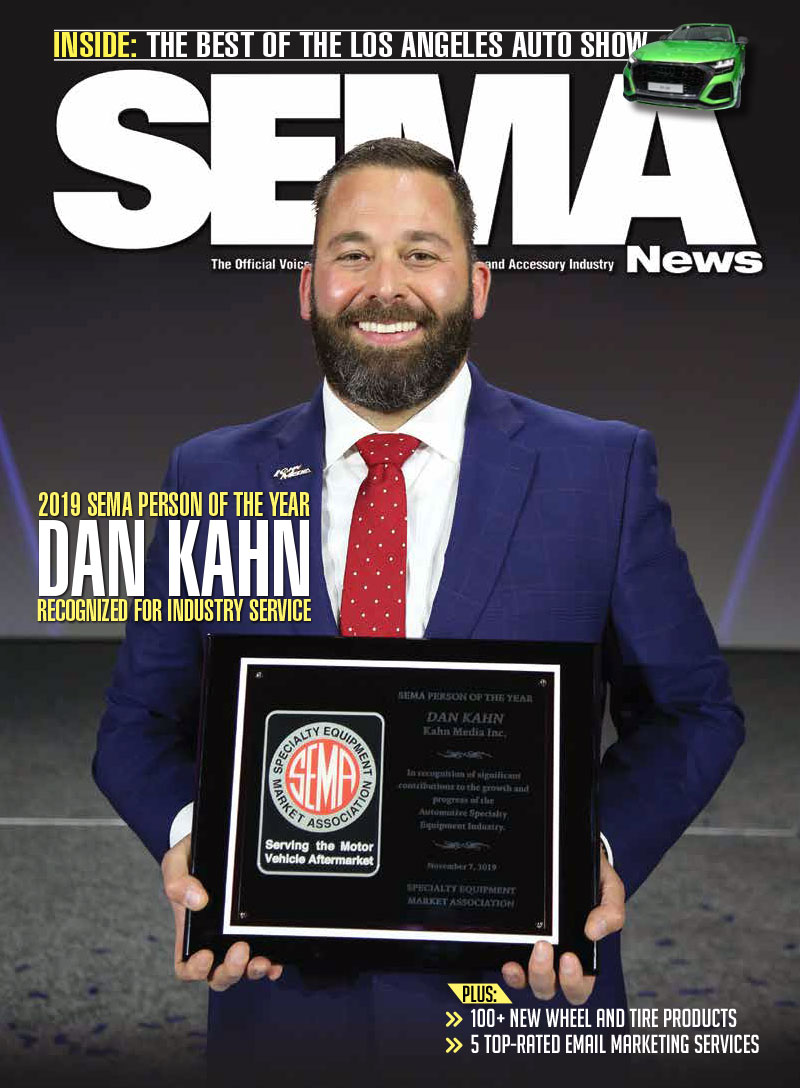 The SEMA Person of the Year award is among the most prestigious of the honors announced each year at the SEMA Show Industry Awards Banquet. Beyond any personal or professional achievements, the award recognizes an individual who embodies service and dedication to the automotive specialty-equipment industry for the benefit of the entire aftermarket. At the recent ceremonies held Thursday night, November 7, at the Westgate Las Vegas Resort & Casino, the association named Dan Kahn, founder of Kahn Media, its 2019 SEMA Person of the Year.

"SEMA is proud to recognize Dan Kahn as our 2019 Person of the Year," said SEMA President and CEO Chris Kersting. "The goal of our association is to ensure that all of our businesses succeed and prosper, and Dan's dedication on behalf of SEMA in service to our industry members is both exemplary and inspiring. His work on the SEMA Board of Directors and within the industry at large reflects the innovation, leadership, professionalism and passion that continue to drive the specialty-equipment aftermarket forward."

Kahn practically grew up in the industry. After World War II, his grandfather took on restoring pre-war vehicles as a hobby. His father built hot rods and cruised Southern California's famed Van Nuys Boulevard in the early '60s. So for Kahn, taking a counter job at Performance Automotive Warehouse as a teenager seemed only natural.

"From the time I was a little kid, I knew what I wanted to do: write about cars," he recalled. "When I was in high school, after landing my first car on a few magazine covers, I wrote a letter to the editors of Car Craft magazine and asked them how to do what they do. They wrote back, invited me to lunch, and gave me a path to follow. When I was finishing college, I connected with DeEtte Crow, the publisher of Rod & Custom, and she gave me some advice as well as a job offer. After working as a print and digital journalist for a few years I thought about jumping to public relations, and Jim McGowan and Lenny Emanuelson gave me a shot and taught me how to do it."

That eventually led to the founding of his own company, Kahn Media, in November 2008. As with many aftermarket startups, launching a media agency could have been a risky entrepreneurial move for Kahn. He had a limited client roster and just the few industry contacts he had built from his prior gigs. Even more problematic, he was starting Kahn Media during one of the worst U.S. economic downturns since the Great Depression. Still, he believed it could be done.

Today Kahn Media boasts a staff of two dozen publicists, creatives and digital specialists working with many of the most prestigious brands in the automotive, aftermarket and luxury spaces. The names include Coker Tire, MagnaFlow, Aeromotive, Rolex, Nitto Tire, Roush, Lotus Cars and the Petersen Automotive Museum, among many others. The agency offers its clients everything from public and media relations to digital and social-media marketing, video production, design, branding, event promotion, pricing and search-engine marketing strategy, website development and even data management.

In fact, Kahn's pioneering blend of social and traditional media and direct consumer engagement strategies has made his agency one of the fastest growing in the aftermarket. More than that, it has given Kahn a deep well of knowledge in communicating directly with consumers and engaging the next generation. That experience, along with his broad work with aftermarket manufacturers, builders, warehouse distributors and retailers, inspired him to run for the SEMA Board of Directors in 2015, offering an ear to the ground for the industry.

"I am very passionate about protecting our industry," Kahn explained. "After starting my business and first raising my hand to volunteer with SEMA, people like Wade Kawasaki and Doug Evans showed me how to lead. Literally every step of my career, I've been surrounded by talented people who were more than happy to show me the way forward and lend me a hand. So when people ask why I volunteer, my answer is simple: I'm paying it forward. This industry has given me a career, a mission and a comfortable, happy life. How could I not give back? So many people have helped me along my journey, and I want to do the same for the next gen."

At the SEMA Show banquet Kahn was praised for the passion and knowledge he has brought to his extensive volunteerism on the industry's behalf. Now serving his second term on the SEMA Board of Directors, Kahn has devoted countless hours on the SEMA Show committee, the Youth Engagement task force, the SEMA Communications task force and on the Board's Nominations Committee. In addition, he has volunteered significant time to all of the SEMA councils and networks, mentoring and cultivating the next generation of leaders and assisting on legislative initiatives such as the RPM Act. A recipient of a SEMA Young Executive Network Vanguard award, he has also been a frequent speaker at industry events.

"The night I won, I thanked a lot of people who have had a direct impact on my volunteerism—mentors and friends in the industry," Kahn said. "I was so overwhelmed that I got cut off before I could thank the one person most critical to this award: my wife Sheridan, as well as our three kids. Eleven years ago, when I came up with the idea of starting Kahn Media, she was the first to encourage me to do it, and her job and hard work gave us the stability we needed while I worked crazy hours running a startup.

"When I started volunteering for SEMA a few months later as part of YEN, she encouraged that as well. As my Kahn Media work and SEMA volunteer work continued to ramp up over the years, she encouraged it and helped behind the scenes. When I ran for the SEMA Board the first time, she helped with everything from campaign ideas to photos and video. Now that we have three little ones at home, Sheridan also keeps everything moving behind the scenes while I'm traveling, which has been often the past few years. Her support has been unwavering. I couldn't have done any of this without her.

"I'd also like to thank several people I've had the pleasure to not only serve alongside but who have become good friends along the way: Wade Kawasaki, Melanie White, Kathryn Reinhardt, Rick Love, Kyle Fickler and all the people who have helped show me how to serve, how to lead and how to give back. Also on the professional side of things, Terry Karges, the director of the Petersen Museum, is a close friend and mentor who has given me so many opportunities over the years. I'm eternally grateful to him for that."

"The SEMA Awards Banquet is always a highlight of the SEMA Show week," Kersting said. "After several days of business at the Show, it's a great time to switch gears and celebrate the passion that drives the industry. Dan and our other award recipients all stand out as special examples of the excellence we see on display throughout the Show and the entire industry at large. We again congratulate Dan and all our 2019 honorees."