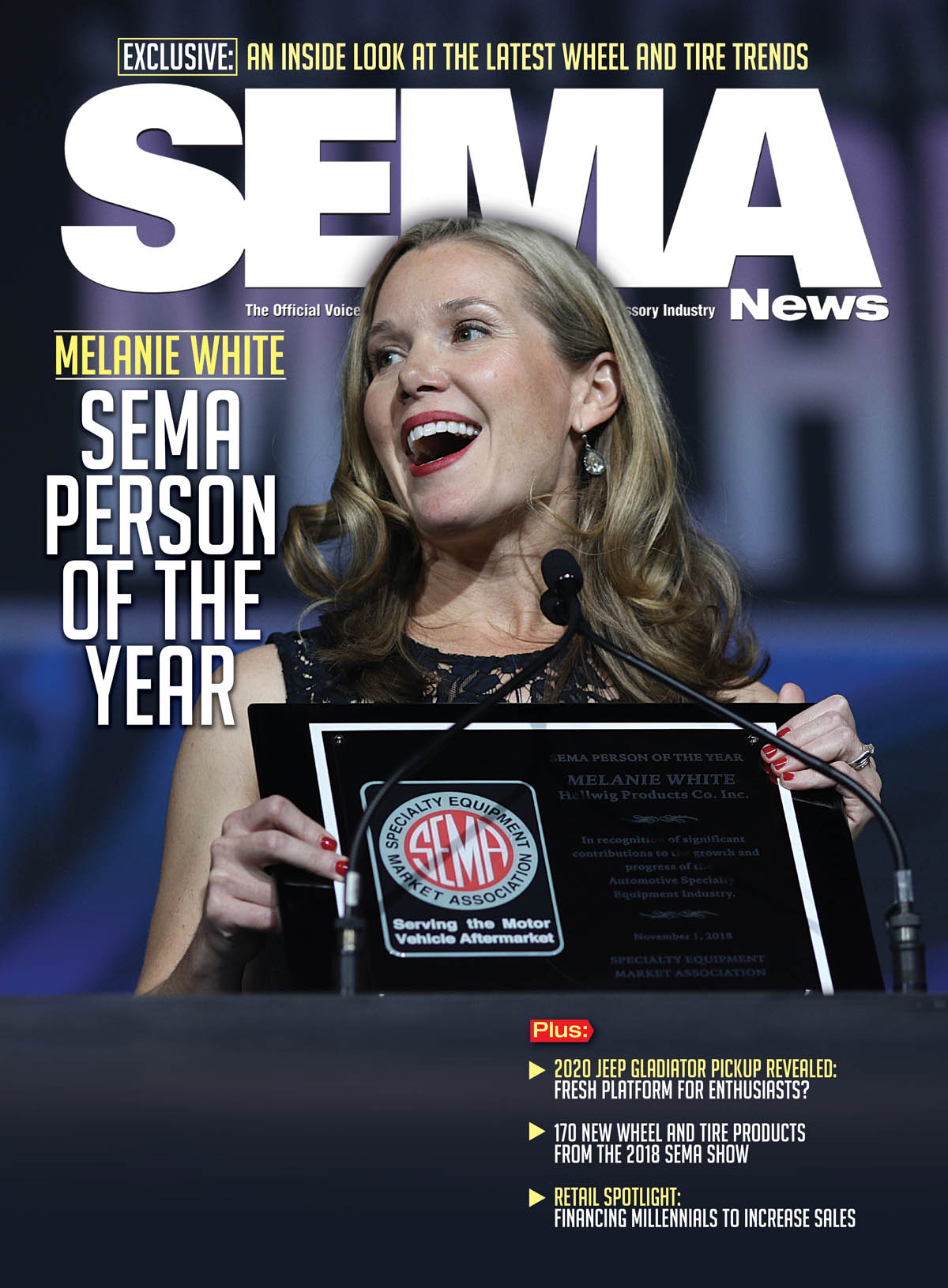 Among the several distinguished honors bestowed at the annual SEMA Show Industry Awards Banquet, the Person of the Year award stands as perhaps the most prestigious. More than their own personal or career achievements, individuals who have received the award were selected in recognition of their tremendous service and contributions to the industry in advancing the success of the entire marketplace. At the recent 2018 SEMA Show ceremonies held in Las Vegas on Thursday night, November 1, the association named Melanie White of Hellwig Products as its 2018 Person of the Year.

White is known throughout the aftermarket as a proven leader for both her own business accomplishments and her dedication to the industry. Hailing from a founding SEMA-member company that has exhibited since the very first SEMA Show in 1967 at Dodger Stadium in Los Angeles, she represents the fourth generation to join the family business established by her great-grandfather in 1946.

White started in Hellwig’s sales and marketing department 13 years ago, working her way up to vice president before ultimately becoming the company’s first female president last year. Even while tackling those considerable company responsibilities, she has always been an equally enthusiastic SEMA volunteer.

In fact, White’s involvement with the association has included membership in six SEMA councils and networks. In addition to earning several service awards from her council groups, she was among SEMA News’ first roster of “35 Under 35” young and rising talents in 2012. White also served as chair of the Light Truck Accessory Alliance (LTAA) and has been an outspoken industry advocate, participating in Washington, D.C., Rallies and joining other SEMA members on international business-development trips. Her combination of experience and character made her a natural choice for the chair position of SEMA Cares, the association’s charity outreach—a role she stepped into last summer.

“SEMA is proud to recognize Melanie White as our 2018 Person of the Year,” said SEMA President and CEO Chris Kersting. “The goal of our association is to ensure that all member businesses succeed and prosper. Melanie’s dedication on behalf of SEMA is both exemplary and inspiring. She truly embodies the initiative, leadership and passion that are at the heart of the specialty-equipment aftermarket.”

For White, receiving the award was an incredible experience.

“Overall, I’ve just felt so lucky to be a part of SEMA and its volunteer network,” she said. “I love this industry so much. I love the people. I love the community and that we are all here for each other. I fell for the industry and what we could do together at my first LTAA long-range planning meeting in Chicago. I remember the awe of just what is possible when we work together. SEMA is a place where you’re able to take your brand hat off and band together as an industry.”

White sees a number of challenges facing the aftermarket and is glad to be a member of a trade association working on effective solutions. She considers her work on behalf of SEMA Cares to be her greatest volunteer accomplishment to date.

“I’m especially proud to be a part of a team that raised more money than ever before for our SEMA Cares charities through our Pinewood racing event,” she said.

On a more personal note, White can’t express her appreciation enough for those who have helped propel her endeavors.

“How many thank yous can I give?” she asked. “I have so many people I’m grateful for. My great-grandpa and grandpa for taking a risk and starting our company and growing it. My dad and mom for all of their support and encouragement through the years. And there are so many family members who have helped the company become what it is. I’ve also had amazing mentors and others in this industry who have become lifelong friends. Also, I wouldn’t be doing what I do without the support of my husband or the encouragement of my son, and I couldn’t do any of it without my amazing team at Hellwig.”

White hopes others, too, will avail themselves of the many education, networking and volunteer opportunities SEMA offers its members.

“I’d encourage folks to get more involved,” she said. “You give time but get so much back. It’s a great community in which to fight for what matters for our industry, and volunteering and being involved with SEMA is among the best things I’ve done. I’ve learned so much about the industry and how to get things accomplished.”

“The SEMA Awards Banquet is always a highlight of the SEMA Show week,” Kersting said. “After several days of business at the Show, it’s a great time to switch gears and celebrate the passion that fuels the industry. Melanie and our several other award winners all stand out as special examples of the professionalism, passion and striving for excellence that we see throughout the Show. We’re honored to be able to recognize them.” 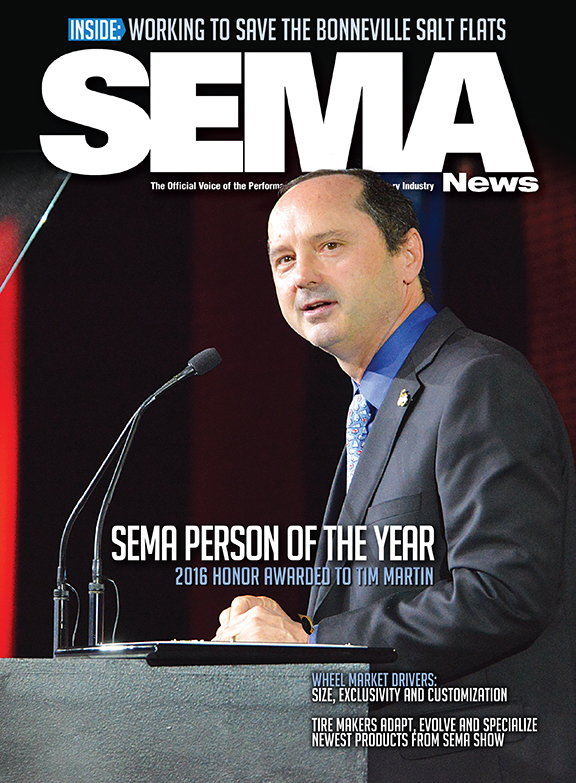 The core mission of SEMA is to help its members succeed and prosper, and a spirit of volunteerism permeates that mission. To grow the automotive specialty-equipment industry and address the broad range of issues facing association members, SEMA continues to rely on the vision and leadership of dedicated individuals from every industry segment who give freely of their time and energy for the benefit of all. In that spirit each year, SEMA bestows its highest honor—the Person of the Year Award—on an individual who embodies the association’s mission. For 2016, that person is Tim Martin of K&N Engineering.

Martin received his award at the 2016 SEMA Show Industry Banquet in Las Vegas. The award recognizes its recipient’s outstanding contributions to the specialty-equipment industry over the course of a year. For consideration, an honoree must work in a SEMA-member company and exhibit professionalism, service, integrity and an ethic that helps propel the industry forward. Martin served many years as a vice president of K&N and was recently made the company’s chief operations officer. His passion for racing, performance and the street-car culture also led him to seek a place on the SEMA Board of Directors.

“SEMA is proud to honor Tim Martin as our 2016 Person of the Year,” said SEMA President and CEO Chris Kersting. “In both his leadership capacities at K&N and on our SEMA Board of Directors, he has become known as a knowledgeable and trusted voice on the business and technological issues that are reshaping the specialty-equipment marketplace. His initiative, leadership and advocacy of industry causes continues to drive us all forward, making a positive impact on SEMA members in ways too many to count.”

Martin’s ongoing involvement with SEMA has included not only outstanding service on the SEMA Board of Directors but also service on a wide range of task forces and committees. Most recently, that has included membership in the SEMA Youth Engagement Task Force and SEMA Garage Advisory Group—two organizations that are addressing key SEMA initiatives. He also currently serves as chairman of the Next Gen work group. In all of these endeavors, his judgment and experience have made him a valued mentor and a respected resource to Board and committee newcomers.

Through it all, Martin has brought a unique career background to his work. He holds degrees in electrical engineering and computer engineering from the University of Missouri and a master’s degree in management from the University of Southern California. His proficiency with business technology and digital marketing made him a most valuable player on SEMA’s Business Tech Committee and led to his five years of service on the SEMA Data Co-op (SDC) board of directors. Thanks in considerable measure to his insights, the SDC this past year reached two extraordinary membership milestones: more than 300 suppliers representing 500 different brands, and nearly 1,000 receiver companies reaching tens of thousands of wholesale, retail and internet resellers.

Since joining K&N Engineering in 1997, Martin has managed different departments touching on nearly every facet of aftermarket business, including sales and marketing, manufacturing, purchasing, warehousing, shipping, software development, product data, e-commerce, software development and information technology. Before K&N, Martin was an engineering project manager for the U.S. Navy and a software consultant to a variety of industries. He grew up in Missouri before moving to California, where he now resides in Riverside with his wife Kristen and their four children, Kevin, Jenna, Kyle and Sean.

“The person we’re honoring with tonight’s award could be described in three words: He’s building us,” summed up Jessi Combs, who, along with Dennis Pittsenbarger, emceed the annual Industry Awards Banquet on Thursday evening of the 2016 SEMA Show. “Industry folks and members of the association describe him as someone who works tirelessly; a man who freely gives of his time and resources, stepping up whenever a leader is needed, including for youth engagement and legislative issues. But he does it for his love of the industry, not to be honored ... His generous involvement and superb contributions reflect the very special qualifications this award demands.”

“It is a great honor to be recognized as the 2016 SEMA Person of the Year,” Martin said upon receiving the award. “It has been a privilege to work with the SEMA leadership team on many issues that matter to all SEMA members. I could not volunteer without the support of the team at K&N and my wife and family. SEMA has many hard-working volunteers, and our industry is filled with talented people. Working with SEMA staff and volunteers has been a rewarding experience for me. This is an industry full of people who love what they do. The work that SEMA is doing is very important to the future of our industry and the automotive lifestyle. I am very thankful to be involved with SEMA and to be recognized as playing a part in our accomplishments on behalf of SEMA members.”