We were excited to kick off the build with a great group of ladies on July 19th! We had several join us from within the industry along with a couple of students from WyoTech. The ladies all worked together on day 1 to disassemble the Bronco, preparing the team for the next few days of the build. Wheels, tires, fenders, quarters, hood, roof, bumpers and seats were all removed. The ladies from Adenna products were also on hand this day to help with the build and educate the team on the products they donated.

PART 1 – Installation of initial parts make their way onto build

Throughout the first couple weeks, several things were accomplished. The team started with installing ICON wheels on Milestar tires, and they also mounted and balanced the tires. Additionally, the team did fitment of the new ADV fender, quarters and hood at the SEMA Garage in Diamond Bar. They also spent some time swapping the front and rear suspension, thanks to ICON they had the parts and instruction provided for a seamless install.

Panels were shipped to UTI so students and volunteers could paint them there over several days. We are very thankful that UTI donated their facility so the ladies could prep and paint the panels there! Theresa Contreras from LGE-CTS Motorsports/Baja Forged was the lead for the paint portion of the build and taught the team of volunteers how to fit, paint, and install all the panels correctly.

August has proven to be busy with the install of the AWE Exhaust. The ladies worked tirelessly to get the freshly painted fenders, quarters and hood installed. Seat covers from Katzkin were also installed and the team from Goose Gear came to coach on the install the half seat delete, cargo storage drawers, and camp kitchen. A Turbosmart blow off valve was installed, along with the reinstallation of the hard top roof and miscellaneous items. Additionally, Baja Forged front and rear bumpers were installed along with a Warn Winch.

After a few weeks of hard work by several ladies, the Bronco was prepped and shipped to Detroit for the Grand Opening of the new SEMA Garage Detroit. We hope you're able to stop by and see the progress that's been made in such a short amount of time!

A big part of the Detroit portion of the build was the wrap, so the team had to prep and clean the Bronco in order to get it ready for the wrap install. This also included removing any parts that would interfere. Items installed included the Baja Forged rear bumper, AMP Research running boards, Steersmarts trac bar and Oracle Lighting products. The vinyl wrap was then installed by Terra Strada Design and many of the women were able to learn alongside an expert.

Another highlight from Detroit was installing the accessories which help the vehicle stand out. Some of those accessories included Molly bags, an air compressor from ARB, Yakima rack and Skyline rooftop tent, various Ford performance accessories including an ARB fridge and Ford Advanced Engineering lit Bronco emblem grill. The group also mounted the TRED Pro Recovery Boards. The women had a great time learning about all the different accessory options for the Bronco. As with any SEMA build there are always hurdles, the ladies learn how to pull together and fabricated items where need be and lean on experts for advice.

Finally, as the vehicle was approaching completion the ladies spent time detailing the Bronco and buttoning up any last minute items before the Bronco is transported to Vegas. The ladies also checked the alignment to ensure optimal capability of this amazing project built by the many talented women in the aftermarket industry. Women were invited to come observe the alignment process and to learn about the many services of the new SEMA Garage in Detroit. From here the vehicle will ship to Las Vegas for SEMA Show for the reveal on Tuesday 11/1 as well where all the ladies who contributed to the build will come together to celebrate this amazing all female built Bronco!

The SEMA Businesswomen's Network is a dynamic group of professionals representing the women of SEMA. The SBN oversees the continued development and management of the SEMA Mentoring Program, the Annual SEMA Speed Networking Breakfast, opportunities for SBN Member Networking, SBN Communications, SBN Projects, development of articles and member features, contributes regularly to SEMA Member News, and much more! 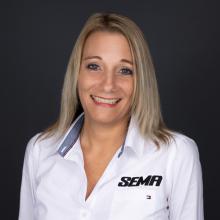